For many years all of us lived with the perception that Energy was available. Somehow expensive, somehow polluting, somehow intermittently but for the majority of the inhabitants of the Globe, Energy was there.

Today the World realizes that this was just a perception.
The whole World is suffering one way or another from an erratic supply of Energy and the Energy Transition.

As IEA reports: “Governments have so far committed well over USD 500 billion, mainly in advanced economies, to shield consumers from the immediate impacts“.

The most blatant case is that of Europe. Europe will somehow squeeze through the dearth of Energy and the enormous cost of the Hydrocarbons that Europe managed to store in the Winter of 22-23.
Europe will be unable to survive if the Energy situation doesn’t change in the Winter of 23-24.
The energy at present is a Geostrategically affected commodity.
It is not divided between the have and the have-nots only but it also depends on the give and the give-nots.
Energy can be seen as a tug-of-war between the Financial might of the West and the Industrial might of the Eastern-dominated Energy economy.
As the COP27 climate summit proved, the West considers that even Climate damage and atmospheric pollution are financial questions.

The difference is that you can print dollars but you cannot print Energy.
Dollars were stronger than Energy when the big US stick was rampant.

After the Gulf wars, this has faded and OPEC became strong and self-interested. The interest and influence of the US on Oil-producing Countries diminished and so did OPEC’s obedience to the US.
Saudis and Russians are now United when Oil is concerned and can influence both quantities and prices.

This old problem of Energy dependence on imports was hoped to be solved by Green Energy for almost a decade now. This dream is vanishing into the future.
It is necessary to give a realistic look at the state of Green Energy now and in the few years to come.
Total modern renewables today (2022) represent about 13% of total Energy consumption. In 2010 the percentage of modern renewables in the total Energy consumption was 8.2%.
Clearly, despite the giant strides made in this period, it will take a lot of time for Green Energy to replace fossil fuels.

How long is the theme of this article together with what is likely to happen in between?

FOSSIL FUELS, THE LONG ROAD AHEAD

Let’s start with Coal.
Global coal consumption according to IEA will rise by 0.7% in 2022 to 8 billion tonnes, a record.
Next year will be an all-time record.
The principal strength of Coal is that it is cheap.
Relatively few countries account for the majority of the world’s fossil fuel emissions, with China responsible for 32 percent, the United States at 14 percent, the European Union at 8 percent, and India at 8 percent.
India accounts for more than 80% of Coal in its energy mix. Its use of fossil fuels is planned to increase.
It is important to note that necessity obliges even Europe and many other Countries to increase their coal consumption.

Next in line is Oil.
Experts agree that Oil demand will reach a high point around 2027 at 103 mb/d and then decline very gently to 2050.
So new investments in Oil resources are required following some COVID years of no new investment, but Oil resources are available to cover demand if the price is high.
It is expected that prices will be approachable for advanced Economies but often quite high. What is worse, prices will be unstable with a rapid change between low and high which will greatly affect the lesser Economies that are further burdened with rising interest rates and have to choose between servicing their debt or buying Oil.

Last is Natural Gas
Natural Gas demand is expected to rise around 4% between now and 2030 and remain steady then up until 2050.
The price of Natural Gas will drop relative to the recent peaks but more now will be in LNG form, ie. significantly more expensive than before Ukraine.

As shown above, the Green dream is not for tomorrow.

Hydrocarbons will be the main driver of all for years to come.
In the next few years: The big States of Asia like China and India have secured their Hydrocarbon supplies from mainly the Gulf states and also Iran by ignoring the sanctions.
The US is now a Hydrocarbon exporting Country.
The big suffering consumer is and will be Europe, as analyzed at the end of this article.

Renewables.
Investment in renewable Energy sources is the only way out.

As the chart above shows the biggest share (75%) of global capacity additions now consists of solar and wind. This is encouraging.

It cannot however cover the needs immediately or in the next few years.
The probable near future evolution to succeed must address the following issues:

A. The principal sources of renewable Energy are solar and wind.
Both are intermittent sources. The sun shines and the wind blows intermittently.
Storage is needed. The technology for this needs a lot of improvement both in terms of economic storage, duration which is at present 4 hours only, as well as investment cost because at present big storage installations cost about 0.65 M Euros per Mw.
The whole World lags behind in this and, as the share of renewable Energy in the system is increased, more and more storage is needed to assure network stability.

B. The second imperative is the upgrading of the transmission network.
The grid must be more flexible to be able to handle fast Energy fluctuations and transmissions from greater distances to ensure its stability. To get an idea of costs, the EU must double grid investment from 40 billion per year today.
Similar investment costs are estimated for the US and around the World.

C. Finance is becoming an obstacle.
The rise in interest rates is particularly damaging to renewables since their costs are concentrated on the construction stage and interest must be paid for many years.
The construction cost of a solar farm is about 1 M Euros per Mw and the cost of a floating Wind farm is about 5M Euros per Mw.
The extra cost is on the order of trillions over a period of time. 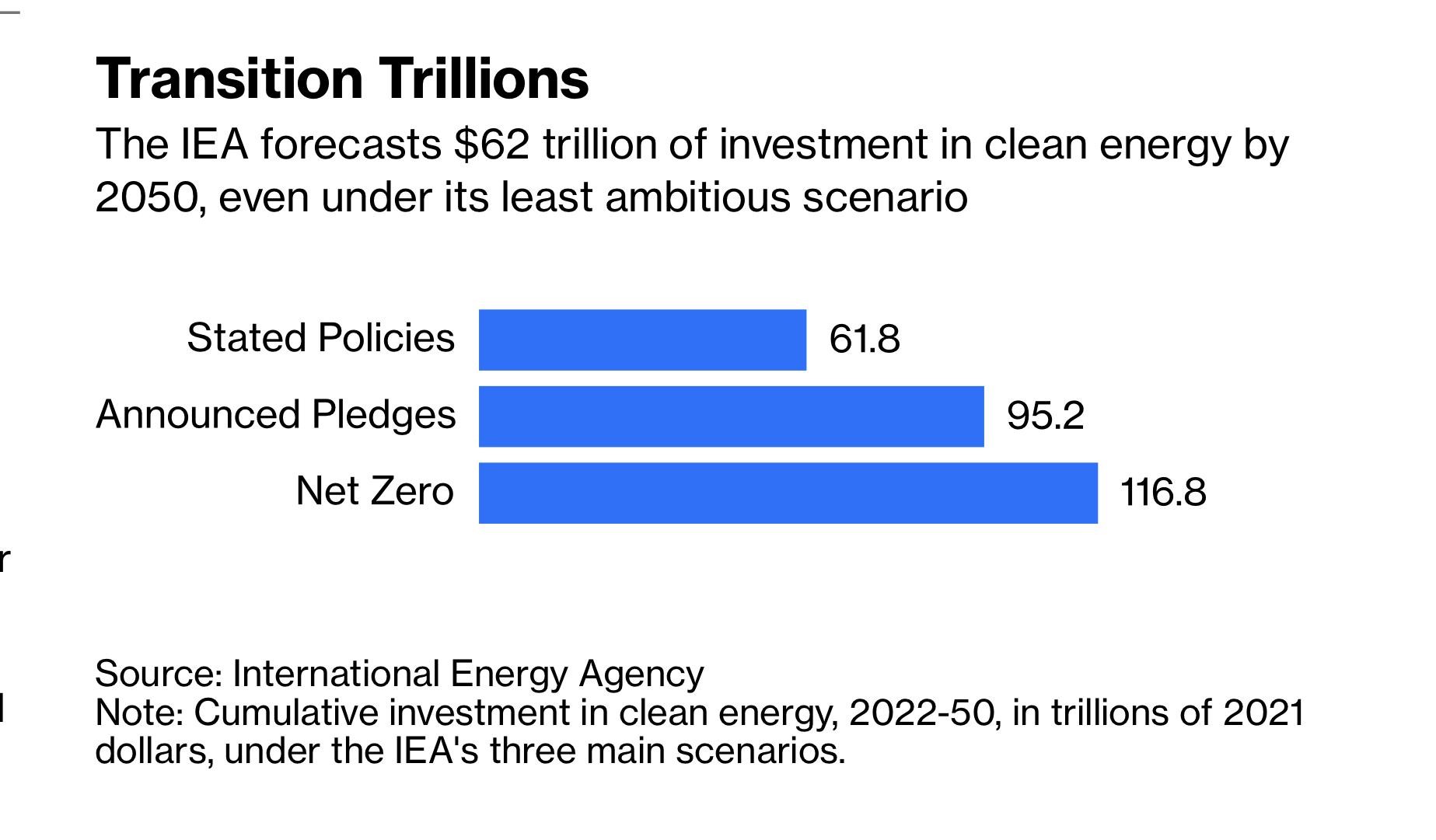 As can be seen from the chart above between 2-4 trillion per year will be spent in the next quarter of a Century to attain an acceptable level of Clean Energy. 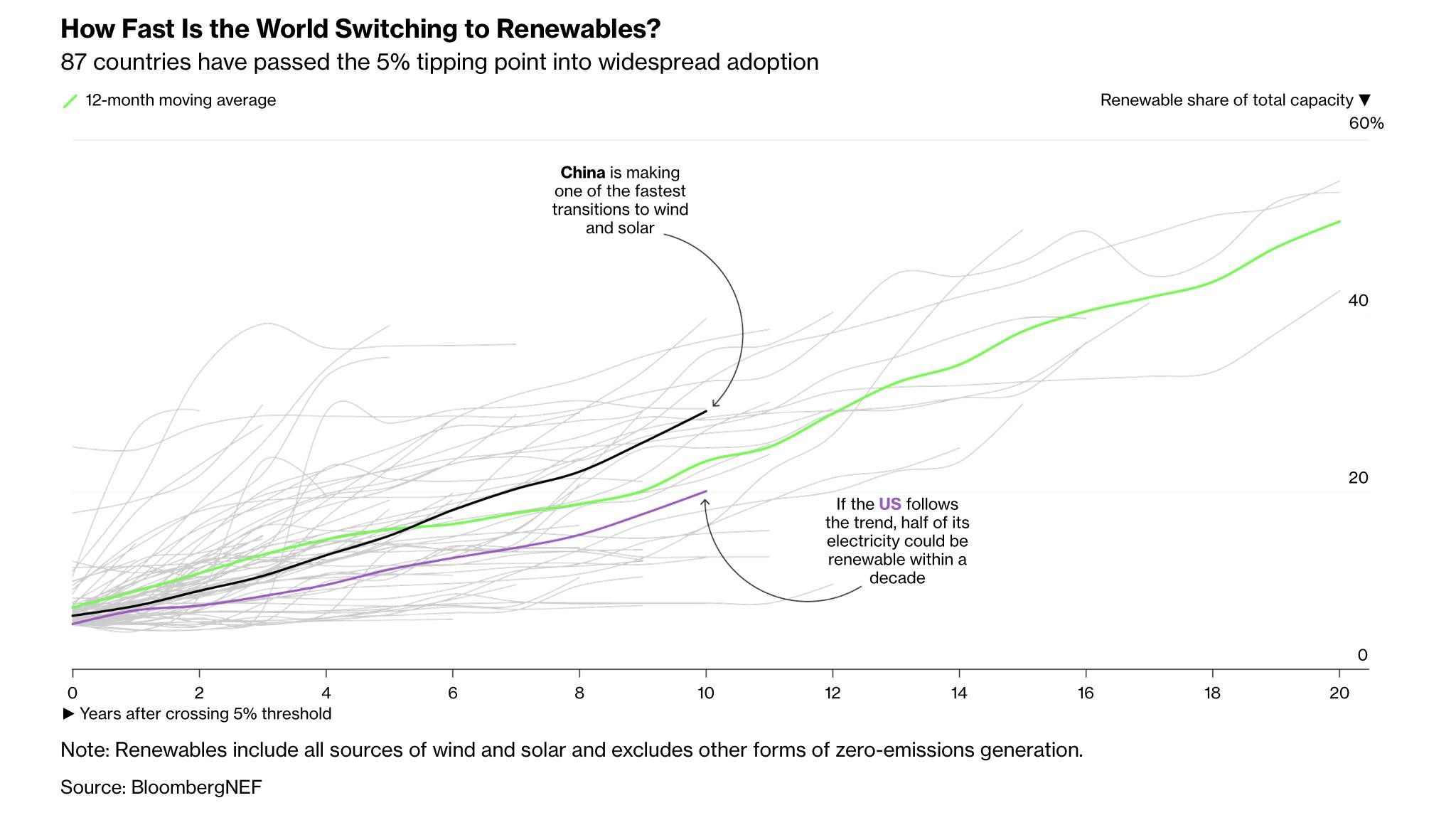 The above graph demonstrates that it will take about 10 years for most Countries to cover 50% of their Energy demand with renewable sources of Energy.

In the meantime, Hydrocarbons will continue to dominate as shown in the following graph

As shown above, the Oil peak is estimated to happen somewhere before 2030. It must be noted that the Oil peak estimates continuously postpone the time that this will happen.
As for Natural Gas, it will peak after 2030.

All the above confirms that the World will still depend primarily on Fossil Energy for many years.

The World will develop unevenly from 2023 and for a few years.
Europe 2023 will have a deficit of about 50bcf of Natural Gas in 2023 which is its prime Energy mover and is more than 10% of its needs.
The rest of the Gas that Europe will purchase will be very expensive.

The above scheme from Visual Capitalist shows that fossil Energy is the most expensive in all its forms in Europe.

There will be forced demand reductions in fossil Energy sources both from Industry and from households. These demand reductions and rising costs will make European Industry uncompetitive leading to factory closures without return, blackouts, unemployment, inflation, and aggressive social unrest on top of the threats that the Russo-Ukrainian war creates.

German Industry is already massively shifting to China. The rest are following.

From 2023 onwards, a few very difficult years are ahead for Europe

Things will get worse before they even stabilize.

P.S.
This week the population of the Earth surpassed 8 billion people. 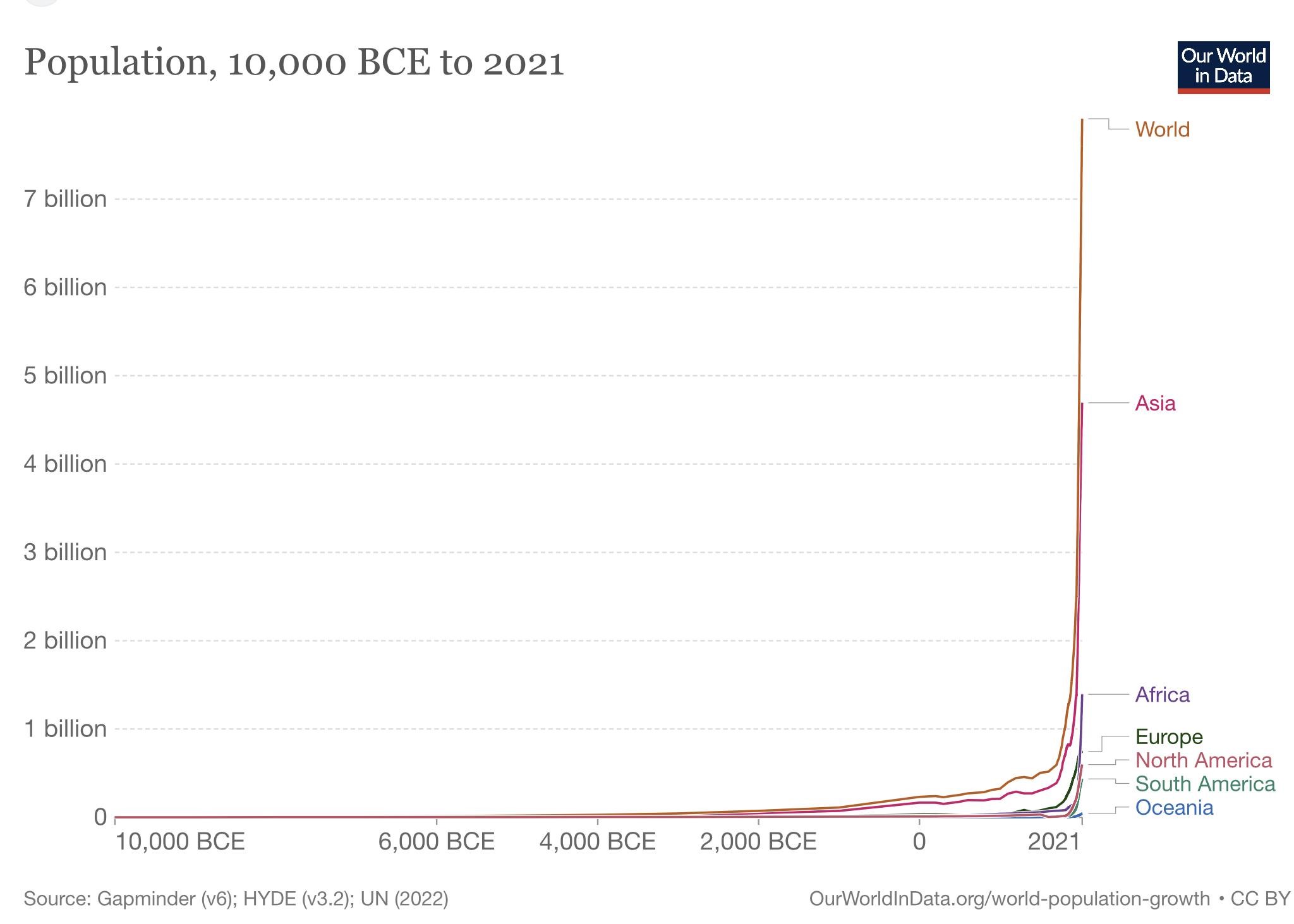 The World population is increasing now by about 80 million per year, all of them needing Energy.