The rejoicing for the recent remarkable and masterly tactical victories of the Ukrainian Army over the Russian one is very understandable but to extract the conclusion that this is the preamble of a General Ukrainian Victory and a Strategic Defeat of the Russian Federation is at least premature if not unattainable.

The little rasputitsa, the famous autumn mud of the region, is already coming.  This means that off-road movement will be impossible for tanks and vehicles, supplies to the forward edge of battle will be difficult, artillery cannot apply ‘shoot and scoot’ tactics and any field movement will slow down significantly. 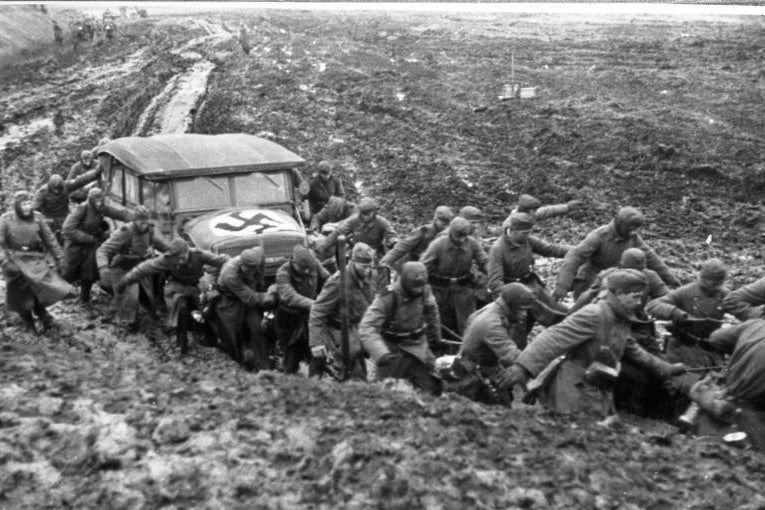 The image above, from the 2nd WW, shows what rasputitsa is and the mud is the same today as it was then.

Both Russians and Ukrainians take this under consideration. The Ukrainians try to reconquer as much territory as possible and the Russians count on General Winter to stop the Ukrainian progress.
This does not mean that it will be all quiet on the winter front.
Both Armies know how to fight in wintertime. It is the type of technological war that is now being fought that makes wintertime operations more difficult.
Drones will operate much less efficiently in the fog and rain of winter. Tanks will not advance. Soldiers will try to keep warm.
Every military engagement will measure results in meters rather than kilometers. This, however, will not stop bleeding in human lives and material resources for both sides. There will be more pain for less gain.

Putin has not won but Putin has not lost either. The War will go on as a War of attrition.
This War and its repercussions are much larger than the Russia-Ukraine confrontation. Belarus is only the start of the metastization of the War.
It is a contest between Russia and the West in an anarchic World that now has neither order nor rules.

As far as the US is concerned it is quite simple. So far, the US managed to harmonically combine Diplomacy with Strategic vision and Logistics support. The rate of support for Ukraine, both in the information and physical spaces was and is always proportional but superior to what Russia attempted in the field.
The US will continue to provide the necessary military materials and economic support to fight the Russians to the last Ukrainian.

For Europe, the issue is not that simple. Europe tries to pretend that it is part of a united Western front but the cracks in the solidarity are already very visible.
With the exception of Hungary and Serbia which are more or less pro-Russian, the rest of Europe is nominally against it.
But it is a question of degree. Poland and most of Eastern Europe, having lived under Soviet rule, are committed word and deed supporting Ukraine and anti – Russian. So is the UK.
This has started to change as high energy bills swing public opinion to a less anti-Russian posture.
The rest of Europe is either indifferent or ambiguous.

The most ambiguous of them all is the Country that started the present imbroglio: Germany, the Economic Leader of Europe.

A decade ago Germany was about to change the Geopolitics of the World.
Germany was interest bound with the Russian Federation, importing raw materials and Energy from Russia at bargain prices and exporting industrial goods and Technology, at such a scale that it based its whole leading and booming Economy on cheap Energy from Russia.
Germany considered that it was so close with Russia and they had so many common interests that, feeling that it was not threatened by anyone, let its Army disintegrate and fully neglected its NATO obligations.
Then came the crowning of the “Drang Nach Osten”.
The Ukrainian revolt of 2013-14 gave the Germans the idea that they could add the wealth of Ukraine in terms of materials, food, and a trained cheap labor force to the benefits that the hook-up with Russia was already producing.
From the beginning of the second decade of the 21st Century the present President of Germany Frank Walter Steinmeier, then Minister of Foreign Affairs and Vice- Chancellor was the aspiring architect of the triangular Economic scheme, in Germany. Russia and a pro-Russian Ukraine.
It goes way back. Steinmeier in 2003 supported Chancellor Schröder, now of Gazprom notoriety, in his controversial decision to forge a coalition with Russia and France against the U.S.-led war against Iraq.
He always kept close ties with Russian and Russian-friendly Ukrainian Oligarchs.
The Germans saw only the Geoeconomics dimension of this endeavor.
The Americans perceived that a new Geopolitical entity, hostile to their interests, was sprouting.
They immediately intervened.
In the immortal words of Assistant Secretary of State Victoria Nuland on 7 February 2014: “Fuck the EU”.
The Americans pushed the Germans out, took over and the curtain opened for the present horror spectacle.
The ambiguity of Germany can thus be explained. Germans believe that the close pairing of Germany and Russia is the best Strategic option for them and that sometime in the future they will re-establish a lucrative relationship with Russia.

This is what explains their refusal to give real weapons to Ukraine and limit the assistance to secondary armaments and even those are delayed by “bureaucratic” obstacles.
Despite Chancellor Stoltz’s impressive statements for a 100 billion euros extra budget for defense, no substantial orders have been given yet to the very substantial German Armaments Industries.

Germany, the undisputed leader of the EE on Economic issues that always impose its will, refused all leadership in this crossroads point of Europe and selected a secondary role in the present confrontation. It is not surprising. Schroeder of Gazprom fame is still a member of the SPD, the party that governs Germany. Even in the collective pan-European issue of Energy and Energy prices, Germany tries to deal with it egocentrically and alone.
This Winter, Germany will see its industries stop and its people feeling the cold of lack of Energy which is now guaranteed by the blowing up of Nord Stream 1 and 2 pipelines.
Although this total dependence on Russian Gas and Oil is a self-inflicted wound, Germany will try to find the elusive solution to start a Peace process in Ukraine so that it will reestablish its ties with Russia.

But now, the stakes are much larger than the war between Russia and Ukraine.
There is an open and broad contest between Russia and the West and China is preparing its contest, considering that its confrontations up to now with the West were just opening skirmishes.
So far, the invasion of Ukraine opened Pandora’s box and proved the inability of the UN to stop a war, the destruction of Global Security, the fragility of the food chain, the precarious and unbalanced dependence of the World on Energy, the weakness of the Democratic institutions, the flimsiness of the World Economy, the crushing of globalization with grave social unrest and use of nuclear weapons lurking.

The rules-based order of things that covered the 20th Century after the 2nd WW is gone and until a new order is established, this disorder breading chaos will reign.
To a significant extent, this is due to the weakening of the influence of the United States on the rest of the World.
Although the US is handling the Ukrainian conflict in a masterly way with Strategic patience and tactical brilliance, the standing of America in the World is not what it used to be.
Proof of that is the behavior of Saudi Arabia, a loyal follower of the US until recently. Despite Biden’s visit and pleas there, the Saudis decided to align themselves with Russia to cut the production of Oil.

In Asia, further to the hostility of China, we see an anti-American Turkey, an Iran that is not afraid of America, an India that hides in its neutrality, a lot of Countries getting closer to China, and a Europe that despite the obvious risks for its survival, refuse to actively support the US in its fight against the Imperial delusions of Russia.

For now, the whole situation depends on the ability of Ukraine to carry on fighting, probably throughout the whole of 2023. After the annexation of parts of Ukraine to Russia, Zelenskyy cannot negotiate with the Russians, only Biden can.
Ukraine is economically bankrupt. 8 million Ukrainians are refugees and millions are displaced. Its manpower is wholly devoted to fighting but new and better hardware is necessary.
Putin will train new forces during wintertime and accumulate stocks.
A spring attack to get Kyiv is very likely.
Ukraine may resist but it is too much to expect Ukraine to win.
The responsibility of stopping the Russian advance to Europe, which is a strategic necessity, belongs completely to the West.
The US and Britain are doing their share.

Inept and fatal, many European rulers see the unfolding drama that happens in Europe with Europe watching only on the sidelines.

It is always Democracies that are slow to rise. This is a risk that may become lethal.