THE ELEPHANT IN THE ROOM IS CHINESE 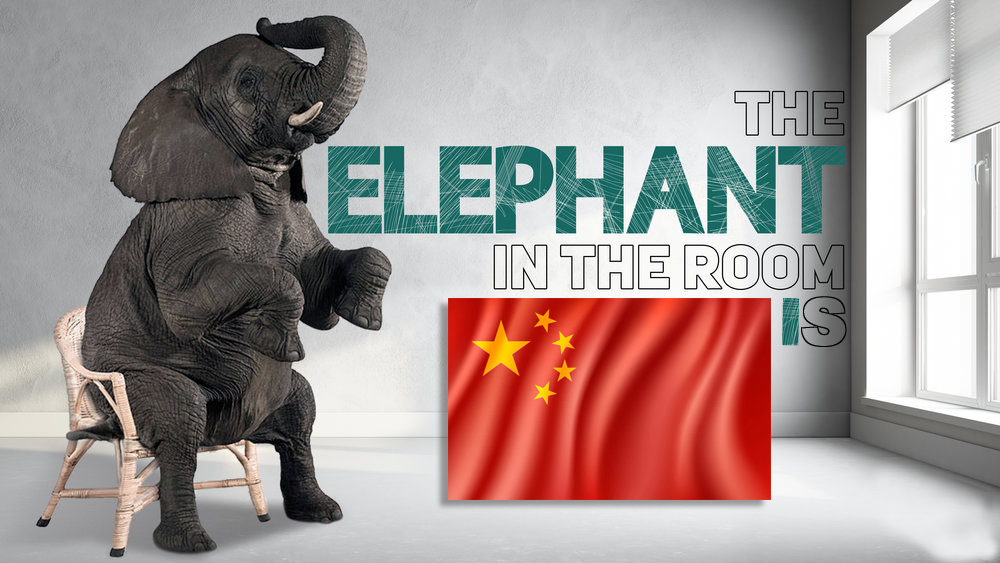 “It’s not that you can do whatever you want — unless you’re in America. This is China”΄, another police officer says sternly, waving a bottle of disinfectant in his hand. “Stop asking me why. There is no why. We have to obey our country’s regulations and epidemic control policies”.

The immediate always hides the most serious.

The dramatic events in Ukraine deflect the attention from the emerging hyper confrontation in the World which will start in 2023.

The principal actor of the coming tectonic change will be China.

China at present
By happy coincidence, China at present is undergoing a big pandemic, and not only, a crisis.
Chinese political dogma does not allow any different handling than that that turns Cities into Stalags for the duration of the Pandemic. This is already leading to an Economic crisis which may cause social upheaval.

This is a gift to American Geostrategists because otherwise, it would have been extremely difficult for the US to handle the simultaneous push of Russia in Ukraine and China in Taiwan.

To understand the Chinese partial withdrawal from the International geopolitical scene the following analysis is useful.

The Pandemic.
COVID is very widespread in China. The chart below shows the extent of it and no further words are needed except that it is spreading to more than 20 regions that account for most of China’s GDP.

The Economy
The Chinese Economy is entering a recession for now. Economic challenges are spiking, and some of them are outside Xi’s ability to manage them.

Within China, Covid Zero-related disruptions to factory activity and supply chains are having a strong negative effect.

Below is the situation with the merchant ships unable to enter Chinese harbors. 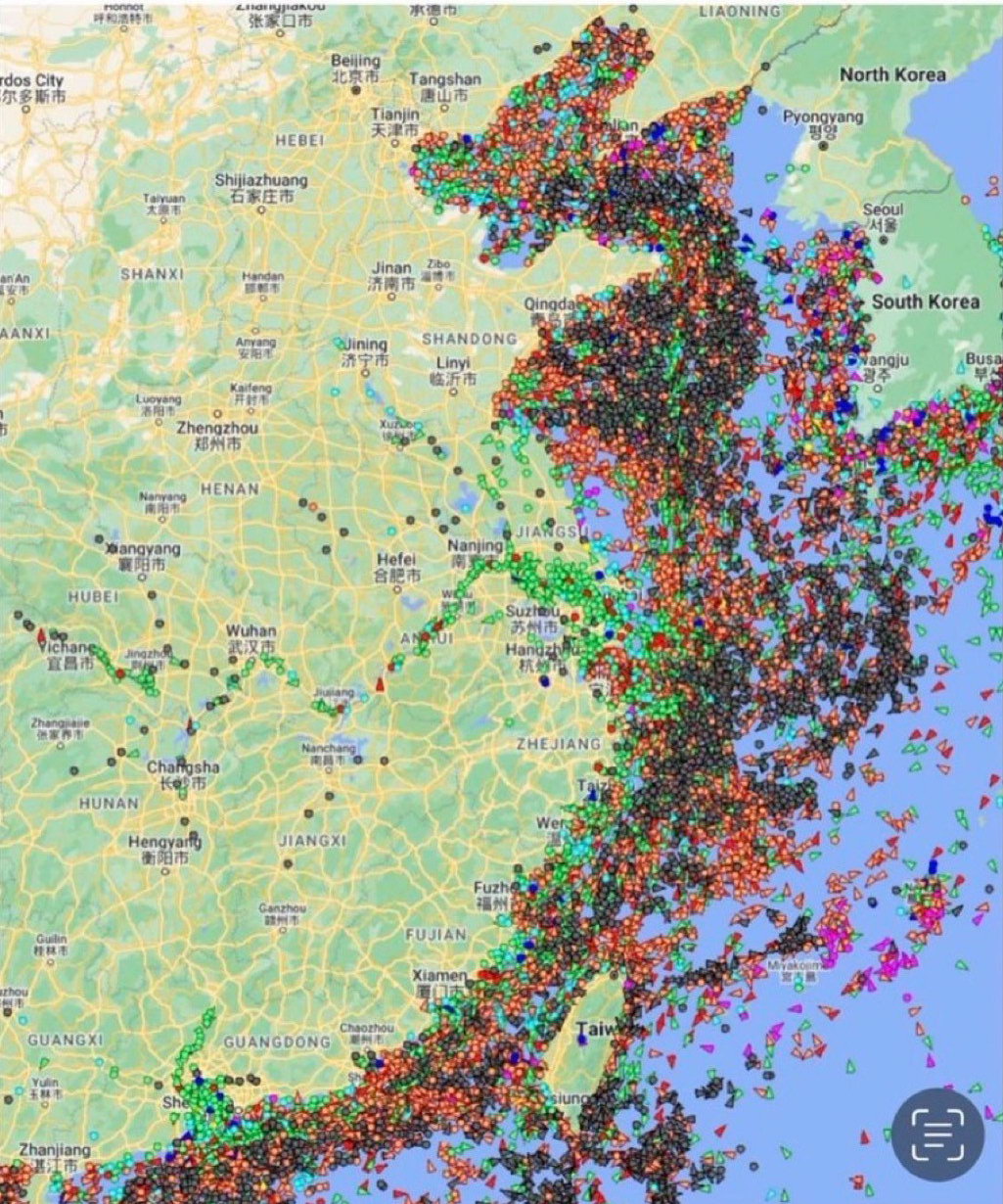 On top of that, there are world hardships following the war in Ukraine. Shortages of grains, cooking oils, and fertilizer are pushing up prices and endangering the food supply of the Chinese. China is restricting exports of fertilizer to ensure that is enough for home needs.

The Chinese economic malaise is due to very limited mobility, a drop-in construction and industrial production, and a shrinkage of services income. Banks are feeling the pinch. The official PMI fell to 47.4 in April. Official non-manufacturing PMI, was 41.9 in April, both indicating a recession.

The attack of Xi on the Hi-Tech companies and their owners is not helping the Economy either.
Xi’s rise and his “rejuvenation of the Chinese nation”, undoing some market reforms and Deng’s restrained foreign policy, created a “reactionary” economic environment.

Stability – politically as well as economically – is key to Beijing’s rulers. At present this is at risk.

The official unemployment rate in 31 major Chinese cities reached 6% in March, a record high. Among those aged 16 to 24, joblessness hit 16%, reaching the highest level in eight months.

This sudden and dramatic depreciation of the yuan shown in the graph below is a worrisome sign. 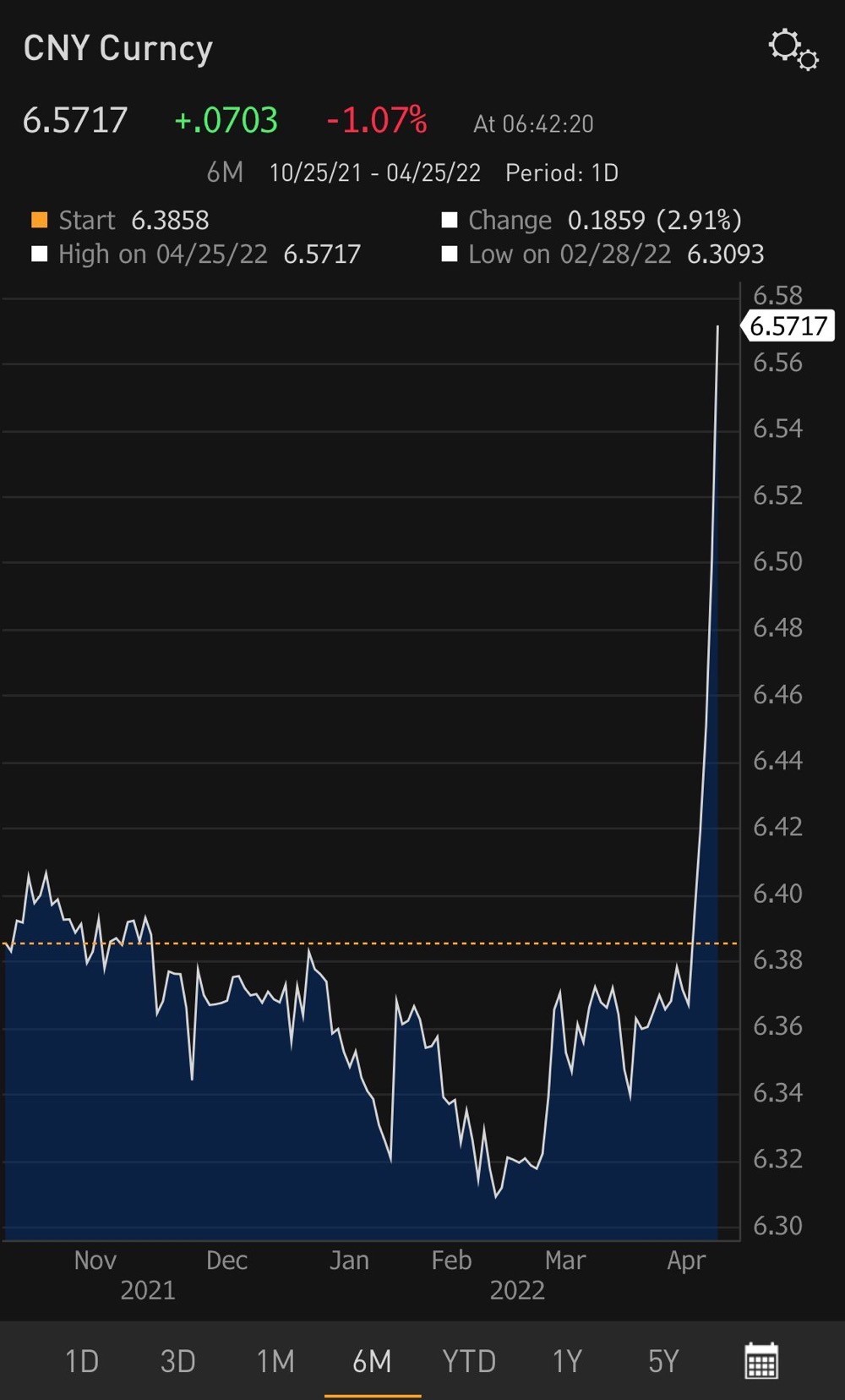 The direction of the move is consistent with government efforts in China to offset the slowing of the economy. The extent of the move is what is unusual, especially as it could raise financial stability issues.

The social upheaval
Xi will be seeking endorsement from the Communist Party leadership later this year for a precedent-breaking third term at the helm.

Xi has every interest to ensure that the present upheaval will end by this summer and most likely he will achieve it.

All the above explains why China stayed quiet while the Russo-Ukrainian war with its cataclysmic global consequences was taking place.

The situation in 2023
In 2023 we will be entering the age of scarcity.
As Bloomberg points out: “The ties that bind the global economy together, and deliver goods in abundance across the world, are unraveling at a frightening pace”.

The only Country in the World that can still supply most, but not all, of the demand will be China. This is the principal World asset of China. Countries that oppose China do so at their Economic and maybe social peril.
China, as all analyses show, will have overcome most of its present difficulties within this year. Then China will proceed to implement the decades-old plan of dominating first the South Pacific, Taiwan included, and then the World.

The end of the War in Ukraine, which is unlikely to last more than the end of this year, because if it does, prayers are recommended instead of forecasting, will leave Ukrainian truncated, Russia exhausted and Europe divided.
Putin, having been discredited as an Energy and raw materials supplier of the West, will have no other option than to attach Russia to China under the stiff Chinese terms.

China will be then ready to challenge its principal adversary, the United States.
Both China and the US have every interest to turn the present multipolar World into a bipolar one and align everybody else behind one or the other.

The lessons of the Russo – Ukrainian War. There are lessons for everybody in this War.

For China, the lesson is that aggressive military operations do not necessarily succeed.
China, to succeed, must seize effective control across Taiwan quickly enough to enable a fait accompli that would be difficult to reverse.

For the PLA to attack Taiwan, it must first cross 100 miles of water and then fight in a 90% urban environment.
The means and logistics of it for the sea crossing only will not be available to PLA before five years at least.
Fighting in an urban environment is the operation that grinds down the attacker more than anything else.

Although the PLA has already started training its units for urban warfare they are a long way from achieving dominant proficiency in this.

China, observing the war in Ukraine attentively, understood the meaning of the nuclear threat used by Putin, and how this impeded greater support for Ukraine from the West and particularly Germany with even the US calculating what type of Weapons to give to Ukraine and the timing of delivery.

The Chinese will use nuclear coercion to intimidate Taiwan and discourage the West from playing a very active role in the coming China-Taiwan confrontation. Their intent is to achieve the military capability to reunify Taiwan by 2027 by a stick and carrot policy.

The priority for China now is to prepare the whole area surrounding Taiwan to be either supported by Chinese bases there or neutral to Chinese operations against Taiwan. This China has already achieved.

This will have the additional benefit for China that it will greatly impede the military material supply pipeline.

The China-Solomon Islands, 900 islands complex, security agreement recently alarmed the United States because it will be followed by a Chinese naval presence close to the Australian sea.

That ensures Chinese dominance in the area since each of those Countries is politically and economically supported by China.

For Taiwan the lessons of this War are alarming.
The most important is that, like Ukraine, the United States will provide only material support and will not engage directly with China.

The second is that they must reshape their military for a layered defense that will oppose the landings and if those succeed anywhere the flexible local forces should be able to eliminate those pockets.
The air force and the a/a capability of Taiwan will be of decisive importance.

Taiwan understands that if the PLA achieves a mass landing capability, sooner or later, the Taiwanese forces will be ground down by the massive numbers of PLA troops.

China in 2023 – Conclusion
Xi is planning for China to dominate all aspects of World issues, particularly global security, challenging on this the traditional security pillars of the US and Russia.

When at the end of 2022 emerges the newly strengthened China whose share of the global economy has quintupled over the last generation, Europe already tired by the fallout of the Russo-Ukrainian War is about to change its Geostrategy and abandon geopolitical dreams of an independent European power pole.  Europe will be gently withdrawing from the Global scene and China will be reinterring it with a strengthened drive.

The opening shots in the coming titanic confrontation will be focused on currencies.
The yuan at present is only 3% of the total transactions. China is developing its own SWIFT transfer system and preparing the digital yuan which by definition will be free to float.
The hegemony of the dollar, particularly in Energy transactions, is being challenged. Russia proved that it can sell in rubles, the Gulf States can easily accept yuan or even rupees, and shaking the dollar was always the dream of both Russia and China. The currency war has already started and will rev up.

The system agreed in Yalta by the Great Powers is dead. China, who was not a participant in that agreement, wants a new World system with China at its head.

The law of uneven growth continues to redistribute power, thus undermining the status quo established by the last hegemonic struggle. Disequilibrium replaces equilibrium, and the world moves toward a new round of hegemonic conflict.
This will be between China and the United States and will be, hopefully, a long one, because if it is short there will not be a winner, the whole World will lose.