DISRUPTION IN THE GULF

The danger level in the Gulf is rising fast, in spite of the recent rays of hope, with no lasting solution possible.

When the Gulf was named Persian, the Arab States were an insignificant collection of tribal groups, imposed at will by the Ottoman Empire, the British interests and even, at a time, the Portuguese.Persia was a strong independent entity and the only significant State in the area, the rest belonging to the crumbling Ottoman Empire.

The Arab States emerged after the milestone of Laurence of Arabia.
Today, both in terms of coastline covered and the number of States wetted by its waters, the Gulf should rightfully be called the Arab Gulf.
The two names symbolize in a nutshell the problem.
Iran cannot forfeit its past dominance and the Arab States cannot impose on it their will. The present situation did not develop overnight.

The number of wars, intermittently conducted in the area for more than a generation, ensure that the calm of the previous generation, imposed by the dominance of the USA in the area, cannot be attained again.
When things in the area had more or less settled after the Egypt-Israel peace agreement, the Iranian revolt that resulted in a theocratic regime created a new instability.

In the mess that followed the Arab Spring, the Obama Administration reached the nuclear deal with Iran, to bring back some peace in the area, making a virtue out of necessity.
The subsequent rejection of the treaty by its principal signatory, the US, was not the caprice of an incompetent in foreign affairs, new President but a geopolitical and geo-economic causality.

While the US was mainly focusing on ISIS and the Sunni Islamism, Iran proceeded to consolidate further its position, developing the remarkable internal technological and productive ability, mainly focused on weaponry, and developing, through carefully exercised influence and violence, its geopolitical importance in the area.

The dominance of Iran in Iraqi politics is proof of its politico-military acumen.
The Iranian presence in Syria and Hezbollah in Lebanon took twenty years to build up but the strength of it now is scary. Iran is dominant from Lebanon and Yemen to Afghanistan.
So is the ability of Iran to conduct asymmetrical warfare and further expand, as witnessed in Yemen, Qatar and recently in Fujairah and the Hormuz Straits.

THE PRESENT CRISIS
A Crisis rarely stems from one event. For a geopolitical Crisis to develop, many parameters must converge. In the case of the Crisis in the Gulf, the principal converging parameters are:

Oil is broadly understood in the West only as a legacy source of Energy to be abolished immediately after coal.

The US has strategically opted to get out of Oil after the next ten years. That defines their policy in the Gulf.

The interest of the US is to control the flow of oil from the Gulf so that they can maximize their own Oil exports before Oil becomes a Secondary Energy Source.

As Bloomberg confirms, the US will pump two-thirds (2/3) of the new Oil and Gas of the World in the next ten years, 40 times more than Saudi Arabia.
Closure of the Straits of Hormuz and a rise in the price per barrel will not hurt the US.
It will allow the American frackers to increase the production of Shale Oil, fill rapidly the World demand gap and make great profits.
At the same time, the geo-economic importance of the US will become dominant worldwide.

The US has opted for maximum exploitation of its strong economic relationship with the Gulf States which is also strongly linked on Defense.
This is resulting in significant budgetary deficits of most Arab States. 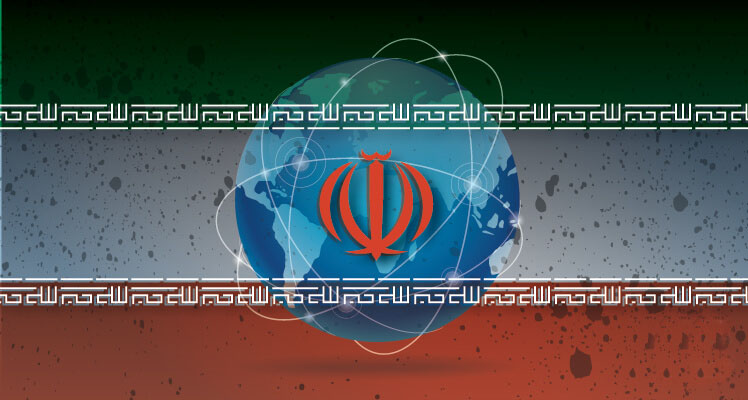 This is a one-way street.  Iran attempts to be the dominant power in the Middle East. To this are opposed, the US strongly and Russia mildly.

Iran considers that its only real bargaining tool with the West is not the Nuclear deal but the politically and militarily dynamic presence of Iran in the whole of the Middle East, including the Gulf.

The regime also believes that surrogate asymmetric warfare works well to its interest in spite of the tremendous economic burden that is deeply destabilizing its Economy and Society. 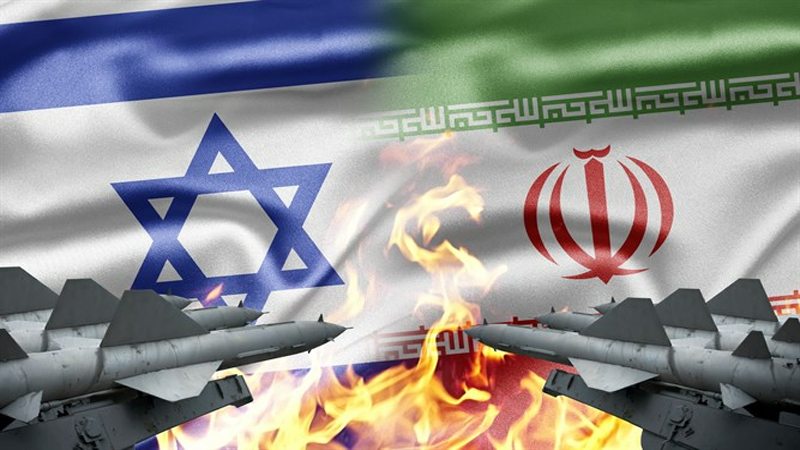 Israel considers that it has a unique opportunity to establish its de jure recognition of most Arab Gulf  States, further to the existing and growing de facto one, because it can, together with the US, provide strong Intelligence and Defense Technology that the Gulf States need, in their effort to stand up to Iranian dominance attempts.

Israel is increasing continuously its pre-emptive operations towards Iran guided forces in Syria and Iraq, that prepare hits to Israel.

Iran is increasing the risk of confrontation with Israel and this is also pushing Israel closer to the Gulf Arab States.

The geopolitical handling of Korea, China, Syria, Afghanistan, Ukraine, Libya, Yemen and elsewhere by the US, has adequately demonstrated that the American prime choice now is the avoidance of military response as a continuation of Diplomacy by other means.

In spite of the bluster of President Trump, as the Iranians recently proved by masterly destructive testing, the US will go a very long way to avoid military involvement. This is a new parameter.

In the past, the American Eagle would scream Once then hit.

Every Statesman now calculates that America will likely avoid a military confrontation in spite of the Eagle’s screams.

Of all the Gulf States, Saudi Arabia has a permanent anti-Iranian geopolitical stance.

Qatar and Kuwait have reached some form of understanding with Iran. Oman is neutral. The pivot is the UAE.

The UAE is the most remarkable case in the Middle East after that of Israel and with much less US support.

The Machiavellian – in the best sense of the word – geopolitical understanding and actions of its de facto ruler, Mohammed bin Zayed, combined with the enormous vision, continuously realized, of the Dubai ruler, Mohammed al Maktoum, managed to jump two Centuries in two generations and create the “Switzerland” of the Gulf. Any “Switzerland” needs peace.

Hezbollah’s Nasrallah, the master of Lebanon, created by Iran, asked in a recent interview the threatening question: “What will be left of the UAE’s glass towers if a war breaks out?”

The Emirs understand that for the UAE to survive the coming Armageddon, they must walk the tightrope of omni lateral Diplomacy.
While their internal apparatus can safeguard against all forms of local or imported terrorism, a little external violence may gravely damage the Emirates.

The UAE understands that it cannot fully rely on the Trump Administration and its opportunistic and haphazard Middle East approach. They also expect the gradual disengagement of the US from the Gulf. That leaves only Saudi Arabia as a mainstay ally.
The Saudis consider themselves as leaders while the Emiratis consider them as partners.
As a result of this internal friction, the UAE develops more of its relationship with Russia and China. 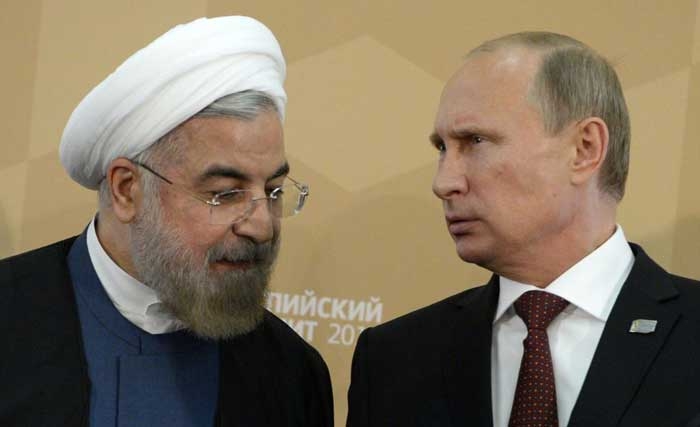 Russian geopolitical diplomacy proved once again, after Ukraine and Syria, its ability to draw benefits from disasters.
Russia initially adopted a neutral stance in the regional conflict, and, while talking with all, assessed where its maximum benefit was.

Russia has a relationship with Iran in Syria.
Despite the ambiguity of this relationship or because of it, Russian positions are considered very seriously by the Leadership of Iran.

Russia is offering something unique to the Gulf States:
Its ability to act as a moderator with Iran. No other State has the leverage to do so. Russia is the dominant power-broker in the region.
The recent Russian proposal for stability and security in the Gulf region through organized consultations with all stakeholders, found immediate adoption by China.

China is even more reserved than Russia to be involved in the Gulf affairs but the Gulf and the Red Sea are important stepping stones to the great Chinese gamble of the rebirth of the Silk Road.

This consists of new multiple avenues to the West with the simultaneous attachment of all areas around this Belt to the Chinese Economy.

China is also dependent to a great extent from the Hydrocarbons of the Gulf.

China will become more and more involved in the Gulf, trying to stave off a regional war, because this will greatly damage its interests.

Professor Dr. Julian Lindlay – French’s, – the very knowledgeable savant on World Order- opinion is: “The Gulf and the wider Middle East stands on the brink of a potentially regional-strategic war that would combine both power politics and confessional imperatives, much like Europe’s Thirty Years War 1618 – 1648. Such a war would threaten to draw in the new Great Powers on opposing sides and would thus have geopolitical implications. Europe could not stand aside due to its continuing reliance for some 20% of its energy needs from the region. It is a very dangerous situation indeed”.

It is obvious that the continuing confrontation, primarily between Iran and Saudi Arabia, even without open warfare, is leading to the medium-term bankruptcy of both Countries, which will be only the beginning of further suffering.

The future can only be guessed but the following stand’s out. Iran is essentially dominant in Syria, Lebanon, and Iraq.

The Iranian leadership is now ready to accept a regional war as the cost of Iranian dominance in the whole of the Middle East with only Turkey and Qatar as allies.

Iranians believe that the cost will be bearable as the US will not very actively intervene and the dismemberment of Saudi Arabia will allow them to fill permanently the resulting Power void.

Saudi Arabia cannot accept Iranian dominance in the Gulf, either through Diplomacy or Violence.

The gradual withdrawal of the US results in a new geopolitical situation which takes shape primarily by the actions of the local actors, with each regional power hoping to be the dominant one, after the detonation of the crisis.

The void left by the US will gradually be filled by the other two Superpowers, China and Russia, that will try to check, or at least control, Iranian and/or Turkish expansion to safeguard their strategic interests.

If Russia and China are not successful, which is very possible, then Israel will go to war with Iran to maintain the status quo ante of the regional order.

The handling of the above parameters up to now, by most of the Governments involved, creates the feeling that a post-dated check has been issued, which will be paid with rivers of blood.