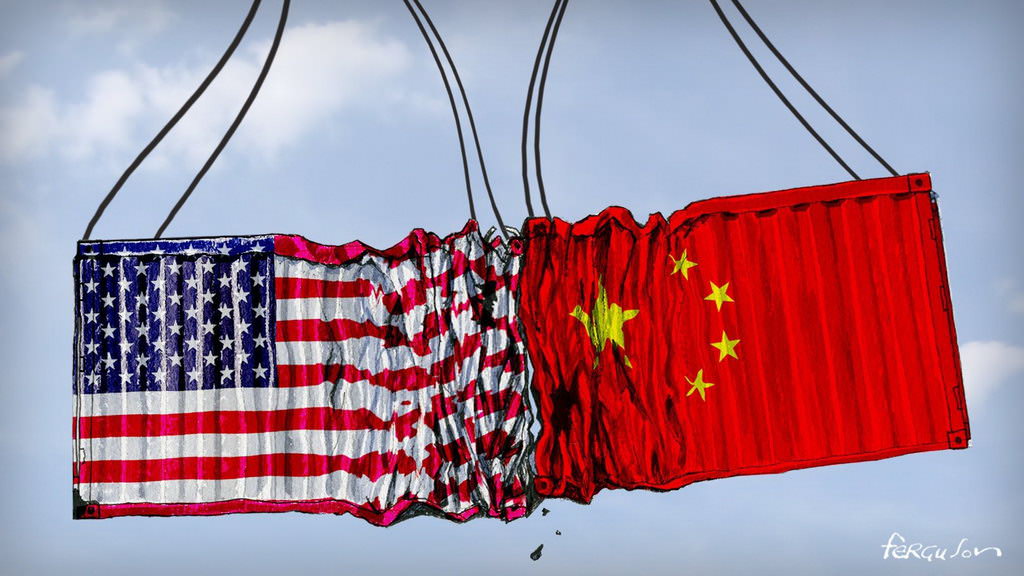 The narrative so far in the Media is that the confrontation between the US and China is an economic one, organized by President Trump and known under the general heading Trade Wars.

This is a reduced and twisted presentation of the reality.

The reality is that the United States have to confront China now or accept that China will be the superior power in ten years’ time.

This is due both to the rate of overall growth of China and also its Geostrategic choice to be an assertive World Power, a policy that is both developed and expressed by the Chinese Leader, Xi.

President Xi is a Leader with Global vision and Global ambitions.

A small proof of that is the Chinese expansion to the limits of the Globe.

China under Xi is increasing its research stations in the Antarctic and is being public about it. On the same time, according to Bloomberg:

“China published its first white paper on the other pole, the Arctic, outlining its ambition for a “Polar Silk Road”.  It proposes building new-design icebreaker vessels and bases, essential tools in an area with fewer barriers to territorial claims than the southern polar cap.

It is, the first time in its long history, that China wishes to expand to the ends of the Globe. Chinese presence is preponderant in Africa.

China loaned about $86 billion between 2000 and 2014 to African governments and state-owned enterprises, and in 2015 Xi pledged another $60 billion under the initiative.

The dominance of China in the Pacific is becoming more visible every year. The long-United States withdrawal from the Pacific, that started during the Obama Administration and accelerated under President Trump, left China without opponents in this area.

In the North Pacific China reached a mutually beneficial “Entente” with Russia, leaving as the only significant opponent Japan.

In the South Pacific, the only Western linked Country, Australia is having a fruitful commercial relation with China. China and other emerging-market countries have already started a new trade-cooperation initiative that will also become a prospering Asian Political Commonwealth, while simultaneously the growth of Western led Economies fades.

The Belt and Road from Asia through Middle East to Europe is an economic initiative that will transform global trade.

This initiative started and continues with intensive diplomacy because, as a Geostrategic/Geoeconomical choice, it dramatically upsets the present Geopolitical status quo, as much or more, as the Marshall plan, that transformed the fate of post WW2 Europe.

One Belt, One Road has the potential to be perhaps the world’s largest platform for regional collaboration which will need to be also Political, for the economics of it to be beneficial for all the participants.

The Belt is the land road, from China all the way through the Middle East to Scandinavia.

The Road is the shipping lanes, essentially from China and the rest of Asia to Greece and hence to the rest of Europe.

The guardianship and exploitation of the World shipping lanes was up to now the role of the US Navy, but the US, in spite of its dominant Navy, is excluded from this gigantic Enterprise.

This initiative, when completed, ten years from now, will make China the indisputable Leader of all Asia and not only. Already China has a dominant position in Asia and Africa. It is pushing gradually on the US in the Middle East, that was after the 2nd WW the exclusive political-economic playground of America, two Gulf Wars and the “Arab spring” included.

The leading European Countries, Germany, France, Netherlands and the smaller ones are intensifying their relations with China to the detriment of those with the United States.

The initiative is challenging by the level of its ambition to 65% of the population of the Globe, one-third of the world’s GDP, and more than a quarter of all the goods and services transiting Worldwide.

Chinese ambitions do not stop at the Earth.

Space and Cyberspace are also domains of Chinese efforts for their mastery. Made in China 2025, is the blueprint for taking the technological leap needed to reach the top position in quantum computing, Space technology, artificial intelligence, communications and robotics. This is where future growth is concentrated and where the great power and profits are.

If and when China achieves preeminence in those fields, four hundred years of Western Global dominance are past.

The United States cannot allow it without a fight, in which the tariff war is just the opening shots.

It is, in effect, a battle of the utmost strategic importance, pitting China against the United States, that see it as the gravest threat to their dominance of the existing world order. The rest of the Western Nation’s see only possible economic profits in their cooperation with China. The United States are without allies.

On the one side, there is the clear (if not publicly admitted) goal of slowing down (if not containing altogether) China’s seemingly inexorable rise as a superpower. And on the other is China’s determination not to bow to the might of the West and forfeit the right to decide its own destiny.

The Stage is already set. The era of easy growth is over. The new crisis is at the Gates. Global economic growth, debt financed for the greater part is slowing down.

Even the mighty dollar is challenged from East and West.

Political and social volatility, is increasing. Strife is not limited to the Middle East. Migration is recognized as a global problem with no apparent solution. Authoritarianism is manifesting itself in Europe and around the World.

Robert Kagan, the Intellectual leader of neoconservative strategic thinking, considers that “American withdrawal from its role of World control, would be the worst possible choice. Like a jungle that keeps growing back after being cut down, the world has always been full of dangerous actors who, left unchecked, possess the desire and ability to make things worse”.

The “liberal world order” created by the United States after the Second World War is an historical anomaly that may be coming to an end, if the US withdraws from World Leadership. The threats, according to Kagan, all come from the political Right—authoritarian foreign powers such as Russia, China, Iran, and North Korea.

America’s global responsibilities, according to Kagan, remain the same as in the Cold War period. Therefore, the US should continue the same, confrontational Policy. This Policy, although very crudely presented by him, is consistently followed by President Trump.

When the President declared: “We will never surrender America’s sovereignty to an unelected, unaccountable global bureaucracy” he did not mean that America is withdrawing. He meant that his maintenance of US hegemonism is to be without diplomatic restrains from international bodies and conventions, anywhere where the playing field may give a fair or unfair advantage to the opponents of this US policy.

In other words, the Trump administration feels that the USA are heavily challenged by both foe and ally and must fight it out alone.

It will be a long, drawn out, fight. China can take the pressure; the Chinese Society is a lot more controlled by its Administration than the American one. The real danger lies if and when China emerges as the winner from the confrontation. If a next step is decided, it will be a very violent one.

Finally, Chinese people are living in what used to be a Chinese curse: